You are here: Home / Elementary / Why are we afraid of big numbers? 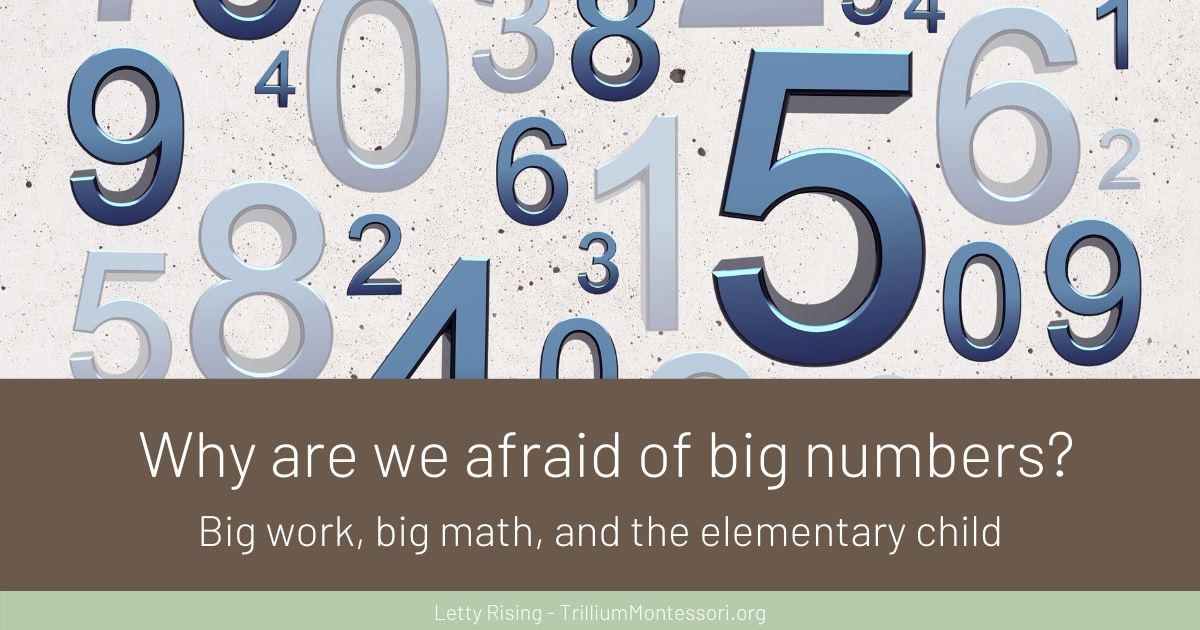 A second-grade teacher in a public school environment is well aware that, by the end of the school year, their students should be able to add and subtract fluently with numbers less than 100.  However, in a Montessori environment, children begin to learn place-value into the thousands beginning in the 3-6 children’s house.  At the start of their Montessori elementary journey, children are typically introduced to the Geometrical Hierarchical Material, where six-year-olds are introduced to a concrete representation of numbers into the millions!  And beyond that, with their newly found powers of imagination, we help them imagine what ten million, or a hundred million, or even a billion, might look like!

And yet traditional schools in the US are intent on keeping numbers small.  Even in some Montessori classrooms, elementary children are assigned problems into the thousands.  You can do an internet search for “Montessori math paper,” and find that there are many different kinds of grid paper you can buy that allow children to create problems into the thousands, but there are no prefabricated sheets that allow for children to create numbers into the millions, which is typically seen when children are using materials for long multiplication and division.  Why is that?

After much thought, I can’t help but think that there is an unconscious belief that lives inside the mind of many teachers that looks like this: the bigger a number is, the harder the problem will be.  But is that really true?  Is there a huge difference between a child doing a problem that contains 10 digits, or a worksheet containing 10 separate single-digit problems?  It depends upon the operation, as there are can be some additional things to keep track of with carrying and borrowing and such, but is a larger math problem truly more complex?  Or does it simply take some extra focus and concentration?

I have had the unique and delightful opportunity to do some professional development and teacher training in Vietnam.  When we talked a little bit about math theory, I remember giving caution about resisting the temptation to only give children problems with numbers with one or two digits, or even 3 or 4 digits. I talked to them about the importance of big numbers, and how big numbers are not something to be feared.  I noticed the audience of adult learners appeared to be unfazed by this information, in comparison to when I’ve given this same caution to guides in the US, who often have an “aha” moment, recognizing an unconscious belief that a smaller number will be an easier number.  Why is that?

After observing the Vietnamese learners being undaunted by large numbers in addition to some meaningful conversations and time for reflection, I connected some important yet fascinating pieces of information.  First, there didn’t seem to be the same kind of fear or hesitation in regard to math with the adult learners in Vietnam that I’ve seen in the US.  But more importantly, if one wants to understand the absence of anxiety over large numbers, one only has to look towards their currency.  Vietnamese currency is called “dong,” and one US dollar is equivalent to about 24,000 Vietnamese dong. This means that 40 USD is equivalent to one million dong!  I realized that Vietnamese people are generally more comfortable with large numbers because they have been surrounded by large numbers for their entire lives.

In the United States, seeing a million of anything can be rare, especially for children.   Consider the “going out” experience that involves children shopping for events and projects and such. The amount of currency the children handle would generally not exceed $100.  Using numbers up to 3 or 4 digits is comfortable for us because most of us are not using currency that involves greater sums on a regular basis. However, Vietnamese children are continuously being exposed to large numbers of this magnitude.   They have the opportunity to see million-dollar bills on the regular from infancy onward, and just like anything else that is introduced during the absorbent mind stage of life, children become proficient at reading and writing numbers into the hundred-thousands, and even into the millions, from a young age.

When I came back from a trip to Vietnam, I brought some currency back for the elementary children at my school to see.  As second plane children are very interested in money, it was exciting for them to handle currency with such large numbers! While a child in the US will almost never handle a thousand dollar bill, I was able to give each child a 1,000 bill and let them know that it is the equivalent of less than a penny in the United States.  We played various games with the money…we organized the currency by place value, we exchanged money for the equivalent of a larger bill. We added the money together and made exchanges. With the younger children, we practiced reading the different bills of money and writing them down according to their place value categories.  We also got into a lively discussion on the currency in other countries, and the concept of “currency” itself, and how money came about as an easier way to trade for goods and services.

In elementary Montessori theory, we learn that children love to engage in “big work.” The bigger, the more elaborate, and the more grandiose, the greater the spark of interest will be! We can apply this to math as well.  Sometimes a child will want to calculate a math problem that spans the length of the classroom. It’s amazing how children don’t tire from this work when it is freely chosen, and in fact, will often create more complex problems than you as the adult could devise on your own.  This complexity isn’t tiring though unless we put into their minds that something that is bigger, or longer, or takes a lot of time is harder.

As adults, we are often sharing with the children our unconscious fears and biases.  This is not intentional on our part, but it is something to be continuously examined.  How many of us get nervous when working with larger numbers, or say something innocuous like “Let’s start out with a small number because it will be easier.”  For those of you who have some math anxiety from your own childhood experiences, I encourage you to examine your beliefs about numbers, question them, and transform them.  High expectations yield high results, and that can begin with the simple step of assuming that a large number can be just as interesting, exciting, and manageable, as a small number. 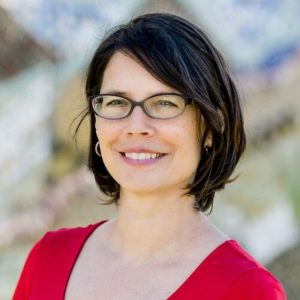 Letty Rising is an international Montessori consultant. She holds an AMI elementary diploma for ages 6-12 and an M.Ed from Loyola University in Maryland. She has held positions as Montessori Elementary Teacher, Education Coordinator, and Head of School with several different Montessori communities over the years, including the LePort Schools.  See More